Archive for the tag “Medieval Times”

Well, I’ve been gone for a few days because I’VE BEEN CELEBRATING MY 30TH BIRTHDAY!!!

I had the best time ever. I was just telling someone that basically if my long time best friend wasn’t overseas, my birthday probably would have been perfect.

My friends came through for me in full force. They wouldn’t let me pay for anything this weekend, they helped me clean and prepare my house for the party and after it was over.

The celebration started Thursday when I started picking folks up from the airport and bus stop. After that, we had an awesome dinner at an amazing restaurant (the same I wrote about previously).

Friday was a day of running around to get last-minute items for the after party. Me and my party command leaders got lunch at the super awesome Dutch Farmers Market and then went to see the movie “Red Tails”.

After that, although Friday was my actual birthday, due to all of the running around, I was so glad to just make drinks, have pizza and have movie night (“Miss Congeniality” and “The Secrets of the Ya Ya Sisterhood”) as my signature dish for the party was cooking (my pulled pork is a six-hour process).

Saturday was so fantastic. All of my friends had safely made it to town, and my girls who were journalists with me in the south were reunited once again. We laughed and made raunchy jokes, we talked about how we all met, we shared moments and talked about being women, motherhood, dreams, finding strength, letting go of negative things and people.

Medieval Times was awesome. And if I wasn’t already drunk, I think It would have still been awesome. I even had a scroll that declared me a “Lady” (Now I have official documentation). I was surprised. The food was pretty darn good. There was sooo much of it! We were all stuffed. Our knight lost, and at that point we cheered on the bad guy. (He was one of two black (black as in African American) knights (ours was too), and we figured we would root for him in honor of Black History month. Symbolism.

Once we realized our knight was African American, we shouted in glee, he’s a brotha! He’s a brotha! *Being in the DC/Baltimore area, we were excited to see diversity because children of all backgrounds could see knights who looked like them.

Politics aside, one of the guest services people, an older black gentleman walked up to me (I thought he was going to escort me out for being rowdy or ask me to sit down) and said, “Just like the movies, the brothas are going to get killed here too.”

Talk about a buzz kill.

But it was hysterical. “Did he just give it away? I started asking around. And sure enough, our noble red and yellow knight was sent first class to the upper room after a valiant joust and hand-to-hand battle.

And of course the evil green knight had to be defeated by the captured prince who had to return home and restore peace to the divided kingdom. However, dude had a lot of swagger (so much so, one of my friends was determined to get a photo with him). We did!  We were like eighth grade girls, “You go, no you go. No come with me, wait he’s talking to someone, no let the little kid go first.” This went on for a while.

After telling him we thought he did a fantastic job, my friend says, “ummm he smells so good.

After photos were taken with the knights, we made our way back to the house for the after party. My same friend who surmised the green knight wears axe made me awesome cookies and cream cupcakes with a mini oreo on top, and the base of the cupcake made of an actual oreo cookie! It was a huge hit.

I mixed my signature pink panther drink and folks loved it.

Everyone did my quiz and confirmed they either knew me well, or learned more about me.

There was some dancing, some singing, more drinking and loads and loads of laughs. I laughed so hard this entire weekend.

My friends are amazing people. They are passionate, intelligent, funny, giving and full of life. I learn so much from each of them on a daily basis, and I knew they were happy watching me be happy.

This was a fantastic, memorable, great weekend. I can’t stop looking at the photos and waiting for more photos from others to start rolling in so I can complete my photo book.

It was indeed a party!

Mood Music: Live it Up, Live

Today’s a light one. I’ve been going pretty heavy and deep the past several posts.

In a good way.

I envision me and my homies having an amazing weekend and the song “Live it Up” totally came to mind. I don’t have John Legend money, but a celebration is in order.

My Medieval celebration makes even more sense and this came to me last night.

We are going to watch a joust. There’s a clear winner, there’s a clear loser and both participants got to have a whole lot of heart to get out there and potentially get their block knocked off at top speed on a temperamental steed.

This is my year of fighting back. I’m on my horse now, it’s time to ride out.

In honor of these warm, fuzzy feelings. I bring you John Legend. Well, YouTube brings him. You know what I meant.

Why My 30th Birthday Will Be Held at Medieval Times 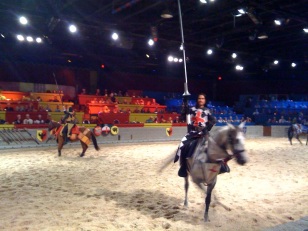 I’m going to have a fantastic time celebrating the big 3-0 at Medieval Times.

I’ve gotten a range of responses from my friends. Some friends have totally gotten it and they understand me and my personality and they are excited.

Other friends have either made faces or just asked “Why?” With a blank stare.

Then other friends expressed their lack of enthusiasm for my choice of venue to other friends and not me. Keep in mind, my big day ain’t until February and I’m already starting to catch some static.

So this is how I feel. (Explaining myself about things I want to do for me is something I plan to leave in my 20s, FYI. I’m making this exception for the blog.)

One: I’ve been trying to get to Medieval Times  since I was a kid and never did. It always seemed cool to me even as an adult, but I never had a good reason to go. I didn’t want to go alone and I couldn’t convince people to go with me any other time besides my birthday.

Two: I’m tired of the club.

That’s right, I said it. I’ve been to a bunch of birthdays where people have bottle service to pay at a minimum, $200 just to have a place to sit while you drink said bottle. For that amount, I can almost pay for every one that I’ve invited with the online discount!! By the time you are tipping the oh so trendy waitresses you hardly see all night her mandatory 20 percent and paying for valet; besides the hourly personal shout out from the DJ, what did you and your peeps really get?

Three: More bang for your buck. At Medieval Times, you get a meal, and you get entertainment that you wouldn’t normally get on a regular basis. You’re eating with your hands, you’re screaming and yelling while real life people are jousting, riding real life horses.

Four: I’ve lived in non-poppin cities and learned that fun is what you make it and with whom you make it.

The people who have tended to give me the gas face about my decision are folks who have a tendency to highly enjoy the pomp and circumstance that comes with being able to skip a line and look down on the peasants from lofty VIP perches. I have enjoyed those moments personally, but it just ain’t what I want for MY birthday.

I’m a silly girl. I’m no-frills. I don’t “put on airs.” I love jeans and tee shirts and hats. I’m artsy, I’m a nerd. I’ve been described as “quirky” more times than I can count. I’m the girl who wants monogrammed mason jar glasses (they exist!) in preparation for my Juneteenth party next year.

For the friends who actually know me for real, celebrating this way isn’t a surprise at all. I’ve had great random moments with friends that included filling watermelons with vodka and eating the fruit all day and playing double dutch. Or taking impromptu road trips. I’ve had moments with friends where we went to festivals and drank wine on blankets all day or got lost wandering museums. I’ve had great moments at sporting events or plays or outdoor concerts with the people I love most. Those moments are the ones I have most treasured and none of them took place sitting behind some rope or getting squished on a dance floor at a club or über trendy restaurant.

It’s just a different kind of experience. Like I said, everyone does the club. Everyone does a restaurant or tries to throw a party at a hall. I’m shaking it up a bit.

What I also keep telling people is, the party just ain’t going to be Medieval Times. I’m going to have a ridiculous after party with great food and lots of drinks.  The following day, I want to have brunch. My goal was to have a fantastic weekend surrounded by friends whom I enjoy spending time with and to make some really great memories.

I will say this. I do appreciate the friends who after questioning my plan and or making a face, just simply shook their heads and said, “Hey, it’s your birthday so we’ll do whatever you want.”

I’m about to be 30, and with that also comes a stronger ‘I don’t care’ attitude. So really, I’m not going to trip off of the people who don’t show up because they didn’t think it was a cool way to celebrate MY DAY.

I’d rather them not show up and ruin the groove of the people who are there and committed to having a good time– no matter what we do.