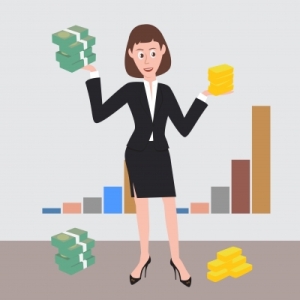 It’s a monster out here in terms of the job market and finding the right gig.

I read a disappointing, and yet truthful article this morning about how the way folks work and do business has shifted and that we basically will never see the days of staying with companies for 20 years, pensions, retirement and such.

As the world gets smaller, thanks to technology, only the hustlers and entrepreneurs will survive. Period. You’ve got to get your own hustle and work it to death and stack your money on your own terms.

It’s interesting that after reading this article with my breakfast, later I found myself  talking to a young woman at work, who I just love and want to see her do well. She has the same apprehensions I had as a young woman around 25, 26.

Her jaw dropped when I told her with a serious and straight face that I always ask for $10,000 more than my current salary for any new job.

A male I was dating, years ago gave me that successful gem, and I’ve never backed down from it. These days, I have dropped to as low as $8,000, but I simply cannot afford to go lower.

That’s bad business for my brand.

I am a single woman living in the DC area. It ain’t cheap. I gotta eat, pay rent alone and just live. Period.

And with my years of experience and what I’m bringing to the table, any move I make, I’m not doing it for less than $8-10,000 above my current salary. Period.

The young lady was shocked. She said in these times no one can afford to be so commanding.

The young lady I was talking to is a latina. I told her, asking for that amount is simply trying to break even. It’s basic math.

With time, you do build confidence. I explained to her, if I hadn’t asked for more money during various periods, the company would have never given it to me.

The second year with my company, I presented the evidence and I got an 8 percent increase to go along with the incremental increases we got annually. But at rates of 1 or 2 percent for those annual increases– if there aren’t any freezes that year– you still aren’t gaining much ground.

If I didn’t get the bump I got in the spring, If I never asked for the increase I got a few years ago, the pay cut we had to take in the fall would have been catastrophic.

Women, if you are putting in the work, and you have proven your worth you have to ask for the compensation.

You just have to.

You can’t be afraid. They can tell you no, but at least they know where your head is at and that if you do leave, they can’t be surprised because you did ask them for more money.

I’m not saying march up to your bosses’ office and demand a raise during crazy times, after a bunch of layoffs. No.

You have to read the climate of the economy and where the company is financially, before you have that serious talk with your boss.

Even in low times, it doesn’t hurt to remind folks that you have weathered the storm, contributed greatly and you want to be remembered for your dedication and service when times are good and the company has rebounded a bit.

Companies are always about their bottom line.

Women, we need to be about ours too. We cannot be martyrs.

Men have a tendency to not have a problem with feeling like they deserve more money than what they are getting. They’ll tell everyone so. Including their bosses.

There was a young man on my job, who had only been around for six months and was actually insulted by the 2 percent bump folks automatically got around review time.

Don’t be delusional, but don’t be a fool by not at least asking for what you deserve and what is an appropriate salary for your position and the region in which you live. Folks need to come correct at least in those areas, if nothing else.

By the time you are excited about a $5,000 raise, unless you are working at your dream job and most of your daily stresses have been completely removed, taxes have sucked out a good $2,000 and you’ll hardly feel it.

So tell me, am I nuts for thinking folks should tell a potential new job to shove it if they aren’t offering an increase of at least $8-10,000?

Isn’t the point of a new job/promotion to advance?

Are women getting better at the art of negotiation? Or are we still trying to keep the peace?

And I hate that. How is asking for what you deserve rocking the boat? I hate when women say, they don’t want to rock the boat or cause trouble because they had the nerve to ask for more money. Trust me, companies are counting on you not to speak up.  Once again, folks need to know where you stand and that you are aware of what you bring to the table, and that you know that they know you may not be getting properly compensated.

*Sidenote. Please have proof that you are killing it in the work place. Write down your accomplishments, save emails from superiors who praise successful tasks, bring back info from conferences… etc. If you are a lazy, unproductive bum, do not march your raggedy self anywhere asking for more money. Please have a seat.

Posted in emotional women, Finances, Is it me?, money, professional life, Real Talk, Taking Care of Yourself, work and tagged asking for a raise, fear of negotiating, getting what you deserve, inequality in pay, job hunting, negotiating, pay, raises in a bad economy, women in the workplace, women's pay